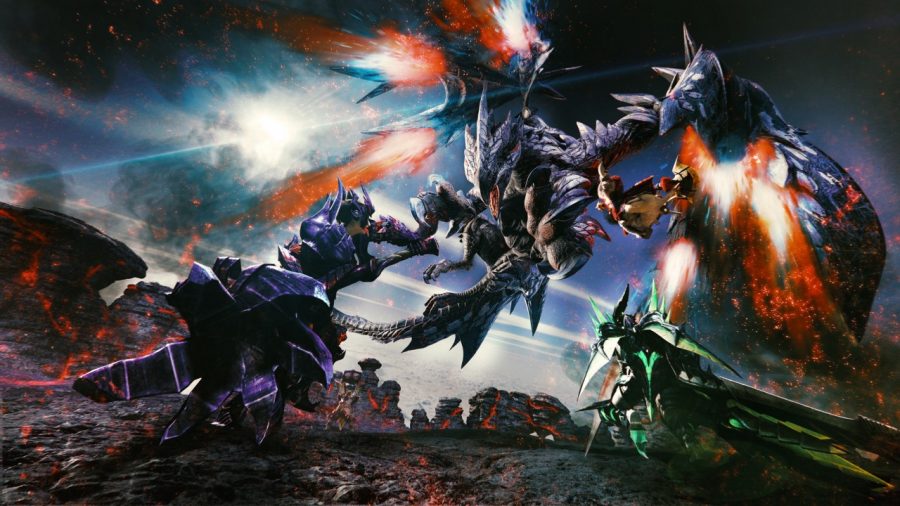 The original Monster Hunter Generations was a 3DS title released back in 2016. The game is very much the “greatest hits” album for the series. It’s filled to the brim with fan-service, bringing in all the fan-favourite monsters for one huge mash up!

For those unfamiliar with the franchise, the core gameplay loop is pretty self-explanatory. As the title describes, you hunt monsters to get materials to craft better gear, to hunt even bigger and badder monsters with.

Generations Ultimate is without a doubt one of my favourite entries in the series, and the best way to experience the “Generation” titles. The game adds in so much more content and features over original. Over 20 more monsters to hunt, along with the infamous all-new Valstrax. It also brings back the familiar G-Rank difficulty, and adds two new hunting styles.

It’s clear the games’ visuals are a far cry from World. They’re pretty outdated and take awhile to get used to. Until World, the Monster Hunter series has never been about cutting edge graphics, but focused much more on the actual gameplay itself. It can be jarring when you look at some gear, as the textures can get extremely blurry and stretched. Though with that being said, the scenery sometimes can look good.

However despite that being said, I do find myself preferring the aesthetic of Generations Ultimate over World. Instead of shooting for realism, GU instead opts for a much more vibrant and colorful design for it’s world, monsters and gear. I love the creativity and wacky-ness for some of the weapons, such as a cat’s head for a bow, or the head of a poisonous fire-chicken as a gun. It’s a charm that Generations Ultimate certainly does well.

For the people who’s first entry into the series was Monster Hunter World, the lack of quality of life features is notceable. It’s hard going back to the old days of paintballs, loading screens between zones, and unsheathing your weapon for items. Although it takes awhile to get used to, it isn’t a deal breaker. The systems have always been archaic.

Also for newcomers to the series, Generations Ultimate is the equivalent of jumping into the deep end. It’s pretty unfriendly to newcomers, and unless you either look up tutorials on YouTube or have a friend take steps with you, the game is very overwhelming. The lack of direction, and decent in-game tutorials don’t help at all either. Generations Ultimate is really a game made as a love-letter to the pre-existing fans of the series.

I always thought Hunting Styles and Arts were a welcome addition in the original Generations game, loving the idea and execution. They added much more variety to the gameplay, and a much needed breath of fresh air for the combat system. This game is no different, the two new Hunting Styles add even more diversity to the field. The new Valor and Alchemist style give players more choice in how they want to play which is never a bad thing.

The prowler mode also makes a comeback in Generations Ultimate, which lets players hunt as their palicoes instead. It’s a mode that was dearly missed in World, because it’s great fun.

Compared to World, where content can run pretty thing after a couple dozen hours, Generations Ultimate boasts the highest monster roster for the series at 93. There’s enough quests to keep you going for hundreds of hours, and the multiplayer set up isn’t at all tedious to set up unlike World, as you can play with friends from the get-go.

Despite all its flaws, I’ve been enjoying my time with Generations Ultimate.  You know exactly what you’re getting, it’s the “All-Star” Monster Hunter. It might be filled with fan-service, but in this case it’s a good thing. If you can get past the outdated systems and graphics, it’s a wacky, colourful, and enjoyable adventure.