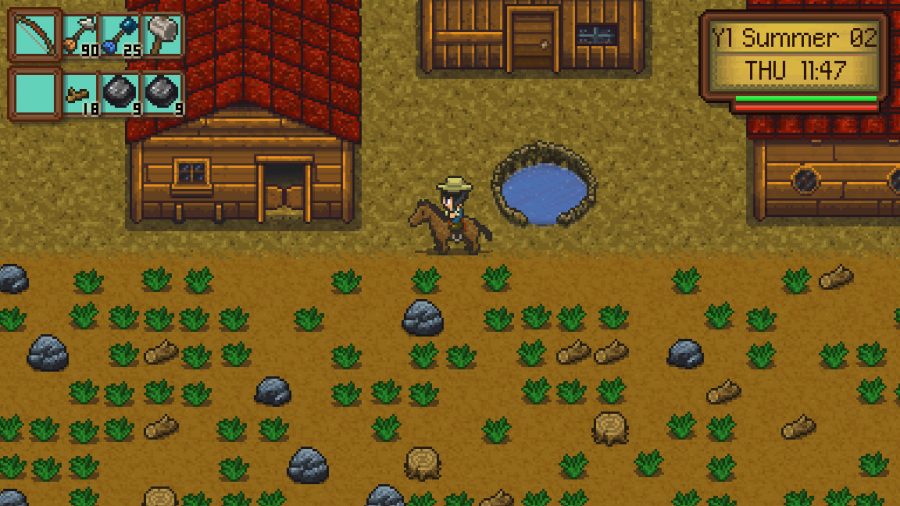 A Stroll Through Gleaner Heights

A blend between the masterfully crafted Twin Peaks and the Harvest Moon formula, Gleaner Heights is a unique farming game that embraces the darker-side of small town life.

The game is currently celebrating its one-year anniversary, so I thought now would be the perfect time to explore the game’s development history. Delving into the design decisions behind the title.

Emilios Manolidis is the game developer behind this horror moon title. The one-man operation first started developing Gleaner Heights back in May 2016, where he described the idea as a “cross between a farming simulator, in a seemingly quiet town full of secrets, plots, double-lives and supernatural horrors.”

Early on in development, the game was briefly known under another title. “Harvest Peaks”, derived from the two main inspirations for the game, Emilios decided to ultimately change this due to potential legal reasons.

“I’m still not sure if Harvest Peaks would incur the wrath of the big guys, but better safe than sorry,” explains Emilios. He would go onto brainstorming some other names before eventually ending upon Gleaner Heights.

“Gleaner Heights sounded okay as a place name, plus in the game you get to ‘glean’ information about townspeople’s lives. Also gleaning is a farming-related activity, so the name kinda killed lots of birds with one stone.”

Some other contendors for potential names included “Farmer, Breeder, Lover, Sinner”, “Over the Grapevine”, and “Fallow Heights”. The first title connected with the main themes and gameplay. Farm activities, as well as innocence and sinning. Whilst “grapevine” could be referencing the popular saying “I heard it through the grapevine” which falls in theme with the gameplay.

Gleaner Heights was the second commercial game released by Emilios, the first being Emerge: Cities of the Apocalypse. Emilios explains whilst he “always had an affinity for computer graphics,” Emerge really helped him improve his skills in game development, and how he approached digital art.

Although development started in 2016, the idea for Gleaner Heights had first formed long before that. Emilios explained that the idea came to him sometime in 2012, when he had started watching Twin Peaks.

“The idea came somewhere around then: What if there was a farming game, seemingly innocent like Harvest Moon, but with Twin Peaks-y stuff going on underneath?”

Although Emilios says he wasn’t a “huge fan as far as the TV series goes”, he really enjoyed the atmosphere and music of Twin Peaks. He loved the ‘Lynchian’ approach to the town life portrayed where “nothing is as it seems, along with the surreal, dream-like approach to practically everything.”

Aside from the television series, Emilios says there wasn’t any other obvious, or huge influences in Gleaner Heights. Though he would drop some nods to other popular horror literature, such as Edgar Allen Poe and H.P. Lovecraft.

Whilst combat isn’t usually a staple in the mainline Harvest Moon series, Emilios made the decision to include the feature, which stems from his love for Dark Souls. “[I] couldn’t help myself.” The Automaton Knight boss in game acts as a homage to the series.

Whilst the Harvest Moon series is typically known for its brighter and vibrant approach to the world with its colour palette, Emilios made the interesting decision to take a darker approach to stay in-theme with the game’s world.

Gleaner Heights isn’t afraid to tackle some more darker storylines, such as abuse and sexism, however Emilios says “the proto-idea in my head was much more edgier and trollish.”

“Initially, the game was thought of more like a period piece: Suburban 90’s town, close-minded people, damsels in distress, sexism, bigotry, protagonist is only male etc,” describes Emilios. “A much more oppressive and backwards setting. But then I started receiving lots of messages from people regarding same sex romances. This would ruin my original concept…”

“How would I be able, for example, to make an in-game story about a person who is secretly gay and the ensuing rejection by the community, along with how players would react to such a thing?”

Eventually he caved, doing whatever a “reasonable, self-respecting developer” would do and changed his stance. “This [is] 2018, and if I didn’t include same-sex marriage some people would mark me as a homophobic developer and crucify me.”

“Everything was a challenge. Game design decisions conflicted with each other, graphics seemed to take forever, townspeople schedules was an enormous chore to create and test, animals would go out of their fenced areas at will, you name it… 100,000 lines of code later, things seem to work, more or less.”

Gleaner Heights served as Emilios’ first venture into the world of pixel art. He was open with the challenges on the development blog, “I’m no pixel art professional.

One of the bigger challenges he faced with the graphics, was trying to balance out between the more “cartoony/cheerful” approach Harvest Moon takes, whilst still keeping dark undertones.

Similarly, despite having no formal music education, Emilios decided to compose the soundtrack for Gleaner Heights himself. He was upfront and honest about his musical capability.

“I have no idea what a C note sounds like, or what a scale can get one well with another,” explains Emilios describing his amateur musical knowledge. He attributes decades of listening to video game music for his ability to string together a melody in his mind. “To actually produce something out of it… That’s the real challenge.”

Emilios turned to mainly using soundfonts for his composing. Finding them more straightforward, and any expensive VST would be out of his price range. “My poor ol’ computer probably wouldn’t handle 5 gigs of ultra quality instruments loaded up all at once anyways.”

Emilios sheds light on the process of self-publishing an indie game on the PC market. Calling it “hilariously easy to publish a game on Steam,” with the real challenge lying in drawing press attention and finding an audience. “Thankfully enough, my idea proved to be interesting so [Gleaner Heights] managed to get some decent press coverage.”

“I chose not to turn to a publisher. On one hand, you buy some more time and someone else can handle stuff like PR, which plays a large role if you are solo”, he explains. “[But] on the other hand, they get their share of things that you could have done yourself. Going full solo was an experiment, I am still new to this professional game dev business and I am testing things as I go along.

Talking about the future of Gleaner Heights, it’s looking positive. Emilios is planning to port the game to consoles, aiming at the Xbox & Switch, though right now his sole priority is sorting out the transition over to Game Maker Studio 2.

“Game Maker Studio 2 will serve as the foundation for console porting and all future updates, so the transition has to be done properly. As for ideas…boy, where do ideas stop?”