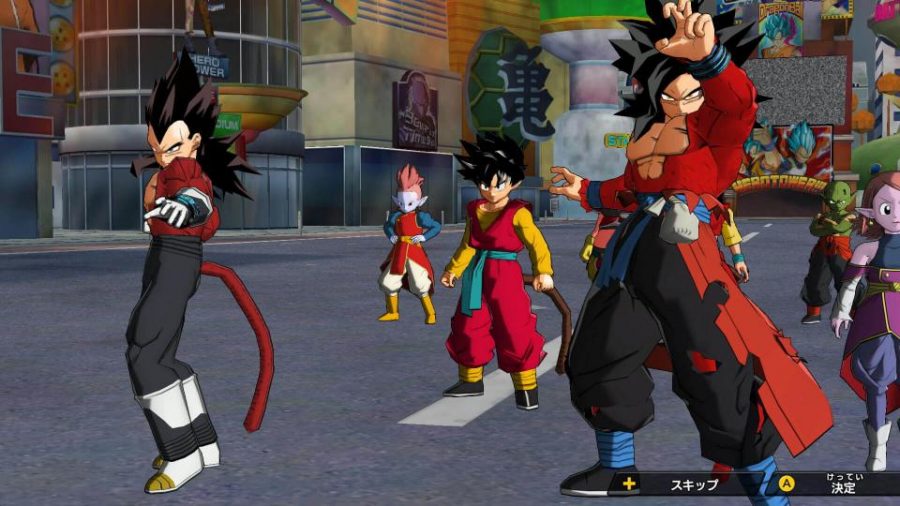 What is Super Dragon Ball Heroes?

Super Dragon Ball Heroes (formerly known as Dragon Ball Heroes), is a trading card arcade game that debuted in Japan back in 2010. The series is a success and has spawned off other media, such as multiple manga series, a promotional anime, and has been ported to the 3DS numerous times.

Until now, the franchise has stayed in Japan for almost 10 years, but Super Dragon Ball Heroes: World Mission is going to be shaking that up. It will be the first time the card game will be available in the West.

The gameplay of Super Dragon Ball Heroes is most comparable to the Hero Colloseum mode in Xenoverse 2, but much more in-depth and fleshed out. However, if you’ve never played that game before either, it’s hard to explain. Although this is a CCG, it plays nothing like Hearthstone. If you want to check out the cards, the Japanese Website has a good database.

World Mission is the latest in the Super Dragon Ball Heroes franchise, and is releasing for the Nintendo Switch and PC [Steam] (for the West). The game will be releasing on April 5th.

This game includes all the old Super Dragon Ball Heroes cards and arcs, as well as Universe Mission 1-2, and also dips into the promotional card sets too. The game also features an all-new exclusive campaign focused around the first time patroller, Sealas.

You only control/play as Beat or Note for the story and in the overworld hub town called Hero Town, you do actually get to have a more customized character called a Hero Avatar which is used for battles, which I’ll explain later on.

In World Mission, Great Saiyaman 3 takes you under his wing, as you help him find out why villains from the Super Dragon Ball Heroes video game are making their way over to the real Dragon Ball World.

What are Hero Avatars?

Hero Avatars are playable characters in Super Dragon Ball Heroes, that are meant to represent the player. There are currently 7 races, with 8 options to choose from; Saiyan (Male + Female), Android, Namekian, Majin, Frieza Race, Supreme Kai, and Dark Demon God.

Every Hero Avatar race allows for three different options that will unlock as you progress through the game and level up. Every race has a Hero type, as well as an Elite and Berserker variant, which also have different stats and attributes.

Players can unlock their new “Class-up” forms for their Hero Avatars by collecting all the Dragon Balls and asking Shenron. If you want to change the race of your Hero Avatar, similarly you can also wish for that.

There are different versions of “Class-up” that you progress through, such as Super Class-up, God Class-up, and Super God Class-up. It’s pretty self explanatory as to what they are, they unlock new forms and God Variants.

As you play through the game, you will be rewarded Gacha Tickets from completing missions. The harder the missions are, usually the better reward payout you’ll recieve.

You can exchange the tickets in the Card Gacha Shop. There are two different options, Normal and Rare Gacha, and if you pull any duplicates you will be given ticket pieces. They can be turned into either Blue (Normal) or Gold (Rare Gacha tickets.

For people that are worried, there is no microtransactions for the Gacha tickets. They can only be earned in-game through doing missions. This is not a freemium title.

When buying Gacha, players are able to select from which set they would like to open. Currently there is the promotional card sets, Universe Mission 1-2, and all the sets from the Original Super Dragon Ball Heroes.

Players will be able to battle their friends online and local over Network Battle. You are also able to edit and communicate with other players through stamps.

The game features three different options for PvP, you will be able to matchmake and play with randoms online, you can create and join lobbies to play with friends, and there is an online ranked mode.

In addition to a full-length, all-new campaign story mode, players will also be able to play through the old arcs/missions from the Super Dragon Ball Heroes franchise in Arcade Mode.

Pretty self explanatory, there is an accessory shop for players to spend their Zeni, which is earned from missions. Players can buy different items, abilities and accessories for their characters to use during battle.

Players can spend Zeni at the item shop to use during battle, such as EXP Boosters, and Hero Energy Potions.

The Creation Shop is the go-to for buying all the Card Editor necessities. Players will spend Zeni rewarded from Missions for Character Stickers, Backgrounds, Frames, and even different effects to apply to the cards.

Super Dragon Ball Heroes: World Mission gives the player their chance to create their own custom cards, which can be used for the Story Mode and Custom Missions.

Cards are created on “Blanks”, which also determine the typing of the card (Hero, Elite, etc), and they can be bought from the Creation Shop with Zeni, or from missions as a reward.

Players will also be able to create their own missions and scenarios that can be shared via the Mission Code, for other people to play through. Nothing is restricted!

Super Dragon Ball Heroes isn’t really set up like any other card game. The mat is split into 4 different rows, starting from the top down – You have the Attack Area, the Middle Row, Back Row, and then the Support Area.

The very first “phase” you will encounter in a match is called the Battle Tactics Phase. This is where you will decide where you place your cards down on the mat. It’s crucial to understand how positioning can affect the characters and game.

Depending on where you place your characters on the playmat, it determines their Ki Consumption, as well as Battle Power (BP) for that turn. The first row adds 3000 BP, the Middle Row adds 2000 BP, Back Row adds 1000 BP, whilst the Support Area doesn’t add any.

Instead though, the Support Area is where you can send your characters to recover their Ki. The Front Row consumes 3 Ki, the Middle Row consumes 2 Ki, and the Back Row consumes 1.

Depending on where you place your character on the game mat in the Battle Tactics phase, this determines and lets you see the “raw” number for your Battle Power. Keep in mind, this doesn’t include any bonuses or manipulators from the enemy. Battle Power is crucial for Hero Energy.

For every 3000 Battle Power your team has, you gain 1 Hero Energy. Hero Energy is one of the most important mechanics in Super Dragon Ball Heroes. It is necessary to use Super Attacks and activate Ultimate Unit Effects. Most of the game’s strategic play revolves around Hero Energy, and manipulating yours (and your opponents) for the best chance at victory.

Every card in Super Dragon Ball Heroes has their own HP stat. This number is then combined with every other character on your deck to create a teamwide HP Pool. In a battle there is a total of 5 rounds, and if at the end of Round 5 both players are still alive, the player with the higher reamining health pool wins.

On release, Super Dragon Ball Heroes: World Mission will be offering Anime & BGM packs as DLC. There is speculation that we will recieve new content/future updates as DLC similarly to the 3DS versions however.

Although the PC Release (Steam) does not offer any preorders, they will instead have a “Launch Day” edition which will include the 11 Early Unlock Cards.

This is only just a light introduction/guide to the franchise. If you want a more indepth look into game mechanics, read GoreshX’s complete guide.

Images and information for this article is from the Dragon Ball Heroes website/database, and GoreshX’s guide.

If you want to discuss the game, or join the community come check out the Reddit or Discord!