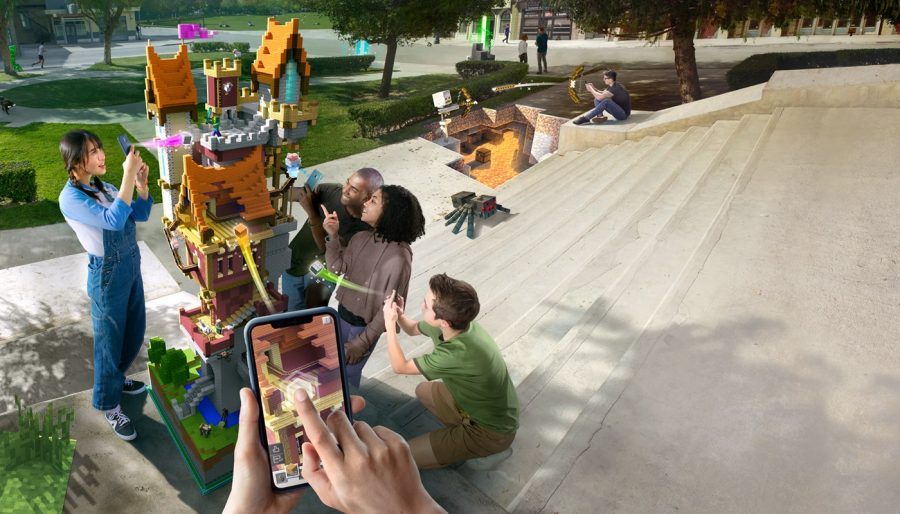 Ever since Niantic released Pokemon GO back in 2016, more developers have been jumping on the Augmented Reality craze.

This isn’t a bad thing though, it’s always good to have healthy competition. We’re in for a busy future, so here are some AR titles to keep an eye on…

Out of all the upcoming AR games, I’m most excited for Minecraft Earth. I think it will be the game that pushes augmented reality to the next level.

In the new gameplay footage, we are already seeing a huge leap and improvements over what was shown at the Apple conference showcase.

I think we will see Microsoft really innovate on the foundations that were set by Niantic with Pokemon GO, inside Minecraft Earth.

The game is built with the Bedrock Engine, and will be using Azure Spatial Anchors to help create massive, accurate AR experiences.

In Minecraft Earth you’ll be able to build houses and even explore Adventures (sort of like dungeons but in the real world) with friends.

You’ll even be able to scale up your builds to life size, and place them around in real life.

Blocks and animals are collected on the overworld map, and even blocks like Redstone have proper functionality!

There will also be never seen before, unique mobs inside Minecraft Earth like the muddy pig!

I think this will be the top game to keep an eye out for, as it is pushing the boundaries of Augmented Reality in gaming.

There are a few hurdles that Minecraft Earth will probably have to face though. Like battery drain, as augmented reality isn’t optional.

Also as you see in the IGN video, performance also looks like a huge issue, the gameplay was pretty choppy.

The beta rollouts have just begun, and you can sign up over on the Minecraft Earth official website. You also get a free skin!

Dragon Quest Walk was really a surprising announcement. I’m a massive fan of the franchise, and I’m super keen to see how this game shapes up.

The series has amazing art direction, and monster designs (of course, it’s none other than Akira Toriyama himself!)

Just looking at some of the DQ Walk gameplay, it easily has the best overworld map I’ve ever seen, it’s so detailed and vibrant.

Unlike Pokemon GO which dumbed down the combat drastically from the mainline series titles, it looks like Dragon Quest Walk still kept its depth.

From first glance it looks like they maintained the turn-based combat, classes and it even lets you create parties!

It looks like Square Enix did a really good job at staying faithful to the core of the Dragon Quest series when transitioning the JRPG elements to a location-based AR game.

The game will also feature a storyline and questing, and there is also a house/room feature for players to customize.

The first beta recently finished up for X in Japan. It is currently unknown if this game will come westward but I’m hopeful. You can check out the official website here.

Men in Black: Global Invasion is the video game tie-in for the new movie that released earlier this year.

Whilst the game technically isn’t released yet, it has come out in some countries as part of early access.

The studio developing the game is Ludare, and they’re aiming to launch the game Summer this year.

Ludare promises to have players “step into the shoes of a Men in Black agent”, as you defend the world against invading Alien criminals.

The gameplay looks different, with more of a focus on combat with turn-based battles and building up teams with aliens.

Personally, I think the game lacks polish and Ludare probably won’t put out the time to work on that post-launch.

It really reminds me of Sony’s other AR tie-in game, Ghostbusters World. There’s some great concepts and ideas, but it ends up just being a quick crash grab for Sony, and they move on.

Whilst I don’t expect this game to be groundbreaking, it’ll probably be good fun for a month or two whilst waiting for Minecraft Earth and Stranger Things.

If you want to ‘enlist’ as an agent for Men in Black: Global Invasion, and keep updated with the game, you can on the official website.

Next Games announced the Stranger Things AR title back at E3 earlier this year with Netflix.

The game is being described as a location-based puzzle RPG, which will have the visual style of a Saturday morning cartoon from the 80s.

Through the use of Google Maps, the developers wil lhave players exploring the upside down, working with friends to fight evil.

There hasn’t been an official title given to the game just yet, but it will be free-to-play launching in 2020.

Next Games isn’t new to location based augmented reality games so I have faith in them.

Previously, they developed The Walking Dead: Our World, so they’re experienced with big franchises and creating AR titles.

Stranger Things is one of my favourite TV Series, and I think a horror location-based game sounds really cool.

Although the game won’t be releasing anytime soon, I think it’s definitely a game to keep an eye on.

Everything we know about Pokémon Masters!

Everything we know about Dragon Ball Z: Kakarot